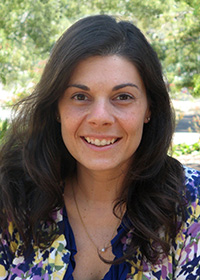 How do we make Tallahassee an oasis for the arts?
This is my hometown and I feel incredibly lucky to live in a community with so many talented and innovative people. The Big Bend region is an arts mecca and almost everyone you speak to is either a practicing artist, of one discipline or another, or is an enthusiastic supporter of arts and culture. One of the very best things we can to do nurture the spirit of creativity and expression is to celebrate it – loudly! I try to do that every day through COCA and I’m joined by so many others in that effort.

If you had to sing karaoke right now, what song would you go with and why?
It would probably be a show tune, maybe something like I Got the Sun in the Morning and Moon at Night written by Irving Berlin for Annie Get Your Gun. It’s always one of my favorites because it pretty much sums up my whole life philosophy.

If you could have a conversation with one artist, living or dead, who would it be?
One of the joys of my job is that I get to have fascinating conversations with artists every day but in regard to artists who I may not have easy access to. I’ve got a list a mile long and it’s impossible for me to choose just one. High on that list would certainly be Artemisia Gentileschi. What an incomparable woman. Though she suffered significant traumas and public humiliations, she believed that following her creative calling was more important than the social norms of her day. Also high on my list would be Czech artists Leopold and Rudolf Blaschka. They created unbelievably realistic and scientifically accurate botanical and marine models out of glass. I’ve been fortunate to see their work in person several times and it’s nearly impossible to believe that I’m not looking at the real thing.

Tell us a little about COCA…
COCA is celebrating our 30th anniversary this year and since 1985, we’ve served as the facilitator and voice for the arts and cultural industry in Florida’s capital area. This community created the Council on Culture & Arts as their designated local arts agency and, as an independent, non-profit organization, we work with those who produce, invest in, and consume the arts and culture in the area. We have a wide variety of programs and services all specifically designed to support our cultural community. I’ve been a COCA staff member for nearly 10 years and I’m exceedingly proud of those I work with and for!

What is one thing most people don’t know about you?
As much as I love art and culture in all its myriad forms, I’m also a science and medical history buff. At any given time, I might be reading a book about American Impressionists or the circulatory system with equal delight. Some of my favorite areas of exploration are those where art and science collide such as our understanding of how the brain perceives and interprets music; the chemist, William Perkin who was the first to mass produce synthetic color, most famously, mauve; or 19th century medical illustrations.

To learn more about COCA, visit their website at www.cocanet.org.