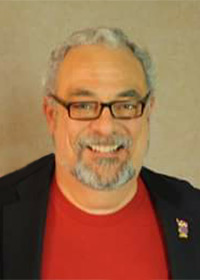 Tell us about Homer Simpson?
I identify with Homer as Everyman. We all aspire to do good and make the world a better place, but we struggle with being human and our very human faults. Homer Simpson illustrates this with timely humor. He’s also the voice on my GPS, so I place a great deal of trust in him.

What inspires you in life?
I’m inspired by my family, my dogs, my clients, and the young people I’ve known through Rotary Youth Exchange. I also find enormous inspiration in learning about people who’ve overcome significant obstacles. I’m currently reading several books about the Holocaust. That some people survived these unthinkable horrors is mind boggling.

Where is your favorite place to go and think?
I think in nature and in the urban jungle. I love to walk my dogs on the Phipps and Meridian trails. I love to be in the middle of big cities. I am a visual, auditory and kinetic learner. Throw stimuli at me! Put people around my. But let me have the occasional break to be alone with my thoughts.

When did you really understand your appreciation for art?
When I was just out of college in the late 70’s, I lived in an apartment just next to Philadelphia College of Art. I gradually developed a social circle heavily populated by artists, performers, punk rock bands, club kids, junkies, drag queens, poets, visionaries and people who were wired very differently than me. I got exposed to so many different kinds of art and expression. I became aware that I am blessed with an abundance of showmanship but a lack of talent, so I’ve gone along for the ride and opened the right side of my brain.

Why get involved with Big Bend Cares?
See item 4. In the early 80’s, some of the characters in that chapter began to get sick and die. It was frightening. Several evolved into health advocates, some involved in direct action like Act Up. This was the first time I’d ever seen people turn health decisions into social and political power. They laid the groundwork for AIDS services of today. But not everyone is able to take up the fight. Big Bend Cares carries mantle of giving people with AIDS and HIV the tools to take charge of and to be active participants in the direction of their lives and treatment. They also continue the mandate to educate. Silence Equals Death.